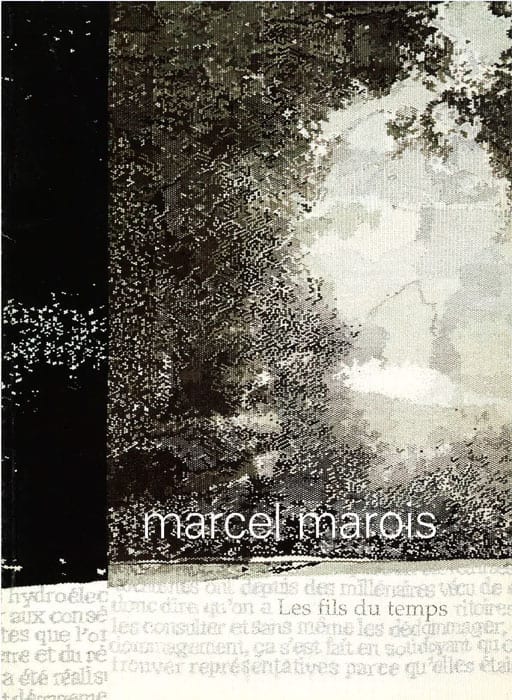 A JOURNEY INTO MARCEL MAROIS’ ENVIRONMENT AND ITS LONG DURATION

I am very pleased to be associated today with this MATERIA exhibition by tapestry artist Marcel Marois, as the Musée national des beaux-arts du Québec is proud to own seven works by the artist in its collection, including “Comme un souffle dans l’onde confuse”, a true masterpiece that has kept travelling all over the world since its acquisition in 1995.

I have great respect and I am filled with admiration for Marcel Marois, whose achievements have brought him important recognition at home and abroad. His allegorical art is inspired by truly contemporary concerns, aptly transformed through the filter of a traditional technique mastered to perfection. The stakes of his questioning and his engagement towards the environnement stem from an exceptional artistic sensibility.

Hour after hour, day after day, month after month, and year after year, the artist has managed to weave a visual world that is as demanding for us than for him, a world that invites us to keep a watchful eye on our fragile environment, observing it at lenght and fully enjoying the beauty around us. Each of his works is in some way an apotheosis of the instant, the subtle outcome of infinite patience. All in all, his practice proves to be an artistic plea for the long duration, beyond the illusions of transience.

Water, land, sky, humans and animals are the sources of inspiration for this art which is governed by atmosphere, rather than by narrative, and by meditation, rather than by swift gestures. In the end, Marcel Marois’ delicate arrangements of threads into complex and unpredictable wefts resemble our collective destinies, produced by joining thousands of personal itineraries with changing textures and colours.