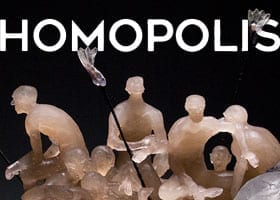 An exhibition by Stephen Pon at Centre MATERIA

As of December 11, winter chills will turn into crystals inside the walls of MATERIA while Stephen Pon will be exhibiting his glass sculptures. You are invited to warm up the atmosphere at the opening on Friday December 11, from 5 p.m.

The Homopolis exhibition will highlight the recent sculptures of the master glass-maker who draws his inspiration from water in all its symbolic power, and from human nature. This exhibition will be, for glass artist Stephen Pon, a special moment to present his latest creations, marking an important transition in his work and in his artistic process.

For MATERIA, Stephen Pon’s exhibition aims at allowing visitors from the Quebec City region to appreciate works of a local artist with a strong presence on the international scene of fine crafts.

Since the end of his studies at the école-atelier Espace VERRE in 2000, Stephen Pon has been perfecting the pâte-de-verre and blown glass techniques. He is known for his ships, created with both techniques, as well as his enigmatic characters. Since 2003, Stephen Pon has been invited to attend many fairs and international events, such as the SOFA in New York and Chicago, and the Cheongju International Craft Biennale in 2009. Stephen Pon lives and works in Lavaltrie, in the province of Quebec.