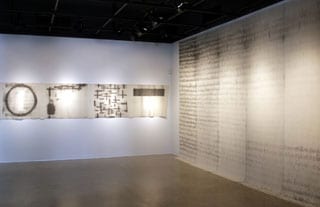 Launching of the 2011 edition of the event En avril… fibre textile art (“In April…textile fibre art”) will occur during the opening of the exhibition « Vita Plume & Caitlin Erskine-Smith: une narration » at Centre MATERIA Friday April 15th at 5 PM.

From April 15th to May 22nd 2011, Centre MATERIA presents «Vita Plume & Caitlin Erskine-Smith: une narration » (A textile narration), a duo exhibition of two great artists exploring textile as a means of expression and affirmation of identity. The exhibition which deals with communication, cultural identity and the importance of written language combines traditional techniques with the latest technological developments.

VITA PLUME
The striking works of accomplished artist Vita Plume reflect her questioning on the experience of the immigrant in a context of cultural displacement. Born in Canada, but still very emotionally attached to her parents’ native Latvia, she expresses the feelings of a soul torn between two identities. Demonstrating a mastery of traditional and modern techniques, her works evoke both the beauty of Latvian symbols and the anguish of a people marked by the mass emigration which followed the Second World War. Yet, as far as colours and patterns are concerned, in her work Vita Plume refuses to be bound by strict traditional culture references. Not only does she take a distance from these references in order to emphasize the political and social dilemmas faced by expatriates, but she also believes that changes over time in a culture are necessary to its vitality.
By the Jacquard loom weaving and Shibori dyeing techniques, her work show very emotionally rich portraits. On the anguished faces of her characters that life events have cut from their cultural background, one can see the artist’s search for her own identity. Deliberately distorted, these portraits, accompanied by texts and patterns, illustrate metaphorically the transformations and instability of memory, identity, culture and tradition.

CAITLIN ERSKINE-SMITH
After studying art and design in Europe, South America and in Nova Scotia, Caitlin Erskine-Smith has used her travel and intercultural exchanges experience to create a textile art focusing on the meaning of communication and the process by which the message is delivered. Her work deals with contemporary conflicts relating to identity and language in the context of a dynamic and changing world. Interested by language, and by the ways coherence can be kept between the intended signification and the message actually received, Caitlin Erskine-Smith deconstructs in her woven works the communication process, exploring how messages can be lost, blurred or distorted. With the use of language and filters, her weavings show a web of letters and words that can no longer be decoded.
In her previous works, the artist applied the technique of painting text directly onto warp and weft threads then weaving these threads to create blurred messages, which enmesh different images and ideas. Building upon this work she now incorporates further aspects that consider how information is generated and distributed.

The works of these two great artists demonstrate mastery of the techniques and show us a textile art that strongly reveals personal and cultural identity.