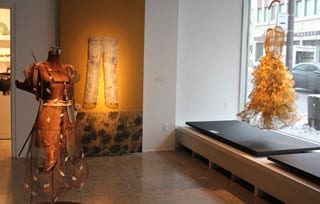 « As I continue to work on the dresses, I want to look closely at the effects our clothes have on ourselves and those around us, using glass to reflect the multitude of styles and emotions clothing can project or create. » (Tanya Lyons)

From November 12 to December 19, the Centre MATERIA presents « Dressing Up ». It is the first solo exhibition held in Québec City by the artist Tanya Lyons, who’s work weaves an intimate link between clothes and glass.

The corpus gathers about twenty works, all as unique as elegant, including her most recent creations which feature mainly dresses. The artist uses the dress, the feminine garment of evening and splendour by excellence, to observe the effects produced by clothes, both on ourselves and on those around us.

By her life size sculptures-clothes, which mix clear glass and objects of the daily lives, either found or natural objects, Lyons treats of the human condition and its changes. She brings us to think about the role of clothing and the way it influences us as individual or as society, and also to consider the effect it can have on our feelings, our behaviours or our relations. Clothing identifies us as it also reveals and reflects the personality, the opinions or the membership in a group. According to the artist, it is like a shell which we wear to please ourselves. The garment can carry a powerful message on our nature or on what we wish to be or want to appear. But appearance can sometimes be misleading… By her use of clear glass, the artist brings to light what, otherwise would not be as clearly recognizable; the added objects specify the sense of the work.

This series relating to dresses, and more widely to the role of clothing, was initially developed during her stay in Japan, during which she was fascinated by all the symbolism inherent to the Kimono. Traditionally, Japanese used the kimono to express various aspects of a subject and also to express characteristics of the person intended to wear it. The kimono was even used like a canvas to express their culture, thoughts and conceptual landscapes.

Dresses and kimonos then become symbols and icons. The glass captures, as much as it lets show through, the moment of a thought, a memory or an emotion. Tanya Lyons’s works are like as many mirrors reflecting life experiences; mirrors in which every viewer can see a reflection of his own experiences.

Although she presented her work within the framework of some solo exhibitions and of several collective exhibitions, both in Québec and abroad (Montreal, Vancouver, Chicago and New York, in particular), this Quebecer native from Ontario remains regrettably little known in Québec. Tanya Lyons’ works are also present in several collections, public and private, including the Musée des beaux-arts de Montréal. She was also noticed in the corporate world and realized works for the hotel Le Germain, in Toronto. She is also a recipient of many prestigious prizes, including the 2005 François – Houde award, a prize created by the City of Montreal and le Conseil des métiers d’art du Québec to underline the excellence of the new Montreal creation in fine crafts.

This prolific artist benefits from a solid formation : Sheridan College (Ontario), The University of art and Design (Helsinki, Finland), Atlin Art Centre (Atlin, British Columbia), Toyama Institute of Glass Art (Japan). In the last months, she participated at the Couture-Verre event (in May, 2010), organized by Espace VERRE in association with the Centre des sciences de Montréal, where she was twinned with the designer Marie Saint Pierre. Tanya Lyons is a member of Collector’s Tour (Gallery Elene Lee, in August, 2010) and, in parallel of her exhibition in the Centre MATERIA, she will be represented by the Gallery Elena Lee during the SOFA Chicago, in November, 2010. www.tanyalyons.ca