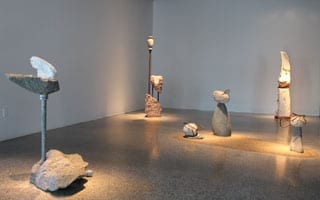 ENCOUNTER AND PUBLIC TALK WITH THE ARTIST, GUIDED TOUR OF THE EXHIBITION AND VIEWING OF A FILM
Thursday, February 17 at 6 PM

Presented for the first time at the Louise and Reuben-Cohen art gallery, in the University of Moncton (New Brunswick), then, more recently, at the Maison de la culture Ahuntsic-Cartierville, in Montreal, this exhibition makes a last stop at Centre MATERIA, in Quebec City. It groups together installations and independent large sculptures produced during the last years by the experienced sculptor Marie Hélène Allain.

Mainly made of stone, length symbol, but also symbol of transformation, the sculptures evoke the origin, growth, decomposition and regeneration processes. These sculptures reveal the intimate, almost sacred connexion, which links the artist to the matter. They express the force of Nature and the force of life as well as environmental preoccupations since the artist is very interested in our responsibility as conscious people aware of the phenomena that surround us. “Found rocks have their own history but there are also human-made objects that the artist integrates to her works as witnesses of the transformation that the human being operates on his environment. […] Allain simulates the work of time, forgetfulness and abandonment. Human intervention may be seen in the found objects, but Nature reintegrated and transformed them.” (GAGNON, Carolle, CRÉPAULT, Monique et SAINT-GEORGES, Claire, « Marie-Hélène Allain : danser sa liberté », Vie des Arts, vol. 42, n° 172, 1998, p. 45-47.)

This exhibition wants to be a reflection on the fertility of art. It questions the place of the artist in our society, the potential of creativity, the difficult dialogs between fine arts, applied arts and popular arts. By her installation named Inutile gratuité, the artist treats of artistic creation and the diversity in the methods of expression. With Secrets d’une passion, she does echo to the desires and to the more or less conscious motivations that underlie the artist’s production.
What are these aspirations that motivate a completely devoted career to the artistic creation?

During her 40 years of career, Marie Hélène Allain realized an imposing production. Since 1972, she participated to almost 50 exhibitions, in Canada and in Europe, of which close to 30 solo exhibitions. Her sculptures are part of several public collections in Canada and in France, and decorate various public places in New Brunswick. Her rich and prolific work brought her several distinctions, including the prestigious Strathbultler Prize in 1996, awarded by the Sheila Hugh Mackay Foundation for the excellence in visual arts or fine crafts in New Brunswick, and the Eloize Prize for the artist of the year in visual arts, in 2001.