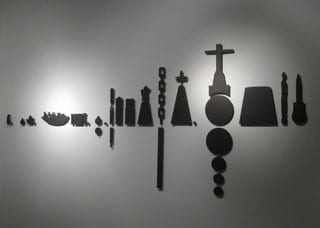 « The idea for this over-1,800 piece testimonial-work and personal inventory of the world came about 2005. Amid these themes and variations, two motifs run through the works of Poissant: time and memory (two sides of the same coin), and the artist-collector. » (Pascale Beaudet, art historian and independent curator)

From September 10 to October 31, 2010, MATERIA presents « Le jeu du collectionneur », a testimonial-work of Gilbert Poissant, an important ceramic artist in Province of Quebec.

Research and realisation of this masterpiece, a work centred on memory, time going and the constitution of a unique graphic language, took place over more than five years. “Le jeu du collectionneur” consists in four parts: La collection (The Collection), Le jeu (The Game), Shadows and Objets spécifiques (Specific Objects). The three first parts have been presented in 2007, 2008 and 2009. However, La collection as well as Le jeu have been modified and improved since. The fourth part, Objets spécifiques, is exclusivity and will be exposed at Centre MATERIA for the first time in September and October 2010.
La collection, a wall installation, composed by several hundred objects of wood amassed by the artist without precise purpose, established the beginning of this art work. The linear assembly, composed by forms and memories of all kinds, looks like a text that can be read at multiple degrees.

In Le jeu, the wall installation La collection has been transposed in a group of forms that evoked utopian towns. The artist’s interest for architecture is then realized through a playful purpose model. This model is a juxtaposition, which creates a fictive urban, poetic and visionary landscape, in the modernist architecture tradition.

In the third part of the art work, called Shadows, 600 silhouettes are creating an architectural frieze as well as an alphabet of forms and a signs language. Composing by 11 autonomous sections of 60 x 60 cm which form a whole, this part results from some recent technical researches. Indeed, this part has been realized by digital cuts and high pressure water jet, a technique of high precision that emphasizes and reinforces the graphic aspect of the art work.

Finally, the fourth part constitutes some representations, in the form of bas-reliefs, of certain objects of La collection.
For over thirty years, Poissant has been developing a practice anchored in the medium. His artistic process, always expressed with extraordinary consistency and exactness, is as vital in his objects, sculptures, and installations, as in the creation of architecturally integrated murals.

Marked by experimentation and research, his professional career has gained him extensive knowledge of materials and a rare mastery of technique, far exceeding the scope of ceramics. His art practice, thoroughly anchored in reality, offers us a very personal perspective on the world. Le jeu du collectionneur is a fine illustration of this.

His attentiveness to each of the objects is palpable. The artist takes us on a heady mix of assemblages, associations, and delicate balances. Relations of scale jostle one another, from the found object to ornaments, from architecture to cityscapes. There comes a time when the object that penetrates us through the senses eventually develops into a presence laden with memories. All Poissant’s work is part of this slow transition between the dazzling and masterful gesture and the timeless moment of emotion. »

Alongside the exhibition Le jeu du collectioneur, MATERIA, the only center of artists and crafts broadcast in Canada, has produced a publication in partnership with Éditions Varia. This publication, noting in passing the ten year history of the Center MATERIA is abundantly illustrated and additional information are substantial, both in French and English. This publication is also the way to seize the impact of Gilbert Poissant’s testimonial work.