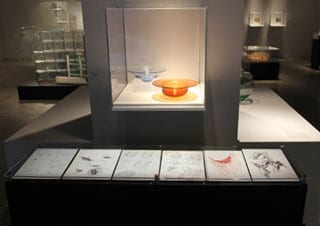 From January 27th to March 11th 2012, the only artist-run centre in fine crafts of Canada, is pleased to host a pretigious exhibition. Curated by Carole Charette, MATERIA presents, indeed, the first posthumous exhibition in retrospective on the work of the artist François Houdé. This remarkable glass sculptor from Quebec is internationally recognized, but, paradoxically, little known in his home town. Moreover, little documentation exists on his creations and no monograph is devoted to his work. This exhibition, being a tribute to François Houdé, aspires to provide a greater opportunity to discover the work of this monumental artist.

The exhibition, in addition to including a selection of pieces representative of François Houdé’s career, many of the Ming series, is accompanied by video interviews, conducted by the Centre MATERIA. Those, reflecting the significant character of the artist and his work.

The opening of the exhibition to be held Friday, January 27th from 17h, will be held under the honorary presidency of Marc Bellemare, lawyer and president of the Club des Collectionneurs en Arts Visuels de Québec.

“This retrospective exhibition on the work of François Houdé (1950-1993) — the first in Québec and the first in Canada since 1989 — aims to highlight Houdé’s unique, complex and iconoclastic multidisciplinary approach. Avant-gardist, Houdé challenges the notion of the “beautiful object” often contiguous to glass art. In an effort to exceed the craft value of glass, and in artistic settings, Houdé has indeed striven to exploit “imperfection” within the material: opacity, matte, texture and fragmentation.

A glass sculptor of international renown, Houdé was the precursor of new techniques for the integration of glass. His artistic productions move away from the traditional fine craft and offer a renewed vision through various series such as: Broken Bowls, Pygmalion, Shipwrecks and Ming. His work is in various public and private collections throughout Canada, the United States as well as Europe.

The artist, moreover, has contributed to the development of his discipline by being co-founder of the Centre des Métiers du Verre du Québec—Espace Verre—which has produced many artists and craftsmen since its founding. His involvement in this outstanding handicraft was highlighted by the creation of the François Houdé Prize in addition to the Houdé-Mendel Scholarship.

This exhibition provides privileged access to François Houdé’s outstanding work. Delicate and light, it is a body of work that captures the essence of the fragility of life. Through it, we enter the private world of the artist, and we discover the richness of his legacy, both artistic and human.”