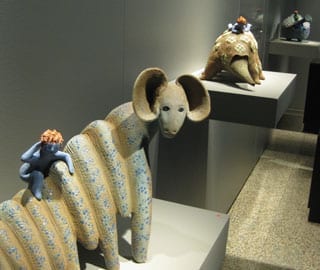 From November 11th to December 18th 2011, Centre MATERIA will be inhabited by a fantastic people: « Les Amourois ». Emerging from the imagination of the experienced ceramist, France Fauteux, these likeable anthropomorphic and colourful characters become alive in a phantasmagorical story. More than a fairy tale, this story may be akin to an allegory on happiness. After having being presented in some exhibition places across the province of Quebec, among which, Montreal and Baie-St- Paul, this travelling exhibition will be stopping in Quebec City, where the artist lives and works. The official opening of the exhibition will take place on Friday November 11th at 5 PM, with, as honorary chair, Mr. Claude A. Simard, artist.

Nature is an inexhaustible source of inspiration for France Fauteux. Fascinated by the similarities she could observe between the animals’ and the human behaviours, she sought in “humanizing” her animal sculptures while attributing to each one some emotions and expressions more usually human. She intends to create an emotional link, strong enough, to let attachment and respect feelings arise with the hope of allowing differences to be appreciated.

Inspired in part by earthly animals, but also by plants, by flowers, by seeds or by ordinary objects, the Amourois live in a dreamlike island where all people cohabit in harmony. Each one, according to his or her personality, plays a defined role and takes part in general balance. All of them dress with the prettiest colors in nature and possess their own textures and patterns. Although each is very different from the others, the Amourois, simple and sensitive people, communicate harmoniously their thoughts and their feelings simply by the sight of their respective physical attributes. These differences, rather than moving them away from each other, allow them to express and understand themselves clearly. Communication occurs on an emotional level. Each creature, animated by human qualities and feelings, is accompanied by little humanoid people, the Tenderness, with which the Amourois maintains a relationship of warm complicity, almost symbiotic. These small creatures are visible and tangible representation of the feeling of tenderness. They have a small hole under every foot to evacuate angers and grudges. Every big creature plays the role of a parent or is a support, a friend or a governess.”

France Fauteux counts more than 35 years of experience in modelage and in ceramic sculpture. The eighteen unique pieces created in the framework of this project, produced in 2007-2008, are fashioned to the hand. In clay, they are realized using a technique derived from the colombine technique, which favours the integration of original and expressive textures. Besides, for France Fauteux, the textures reveal themselves big importance in her creation process. They contribute not only to increase movement and the expression in the characters, but they also represent a language. The research done by the artist also allowed her to develop a very wide palette of colored engobes “vitrified” with a velvety and fine aspect in order to do not impair the most delicate textures.
Through these ceramic figurines, the exposition and the publication* that goes with it invite you to rediscover the child in your heart and to let yourself being transported in an imaginary universe, a wonderful world, far from the small and big dramas of the existence. The public will discover a fabulous tale, on a subject that preoccupies all of us: the pursuit of happiness!

“I dreamed of an imaginary country with neither conflict nor war, a place where harmony and happiness reign, a kingdom of beauty, where living things and nature are in balance.”