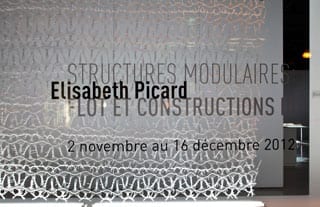 MATERIA invites you to the exhibition Structures modulaires : Flot et Constructions III (Modular Structures : Wave and Constructions), from Elisabeth Picard, with bold and exciting artworks entirely made of Ty-Rap.

Ty-Rap, a material used in fine crafts?
Focusing on the physical and mechanical properties of the cable clamp (Ty-Rap), Elisabeth Picard highlights its extraordinary possibilities: assembly, accumulation, transformation, torsion and translucency. For some of her sculptures, the artist uses traditional basketry. The structures are reminiscent of skeletal structures or animal or vegetable cells, while evolving in a more complex modular way. Other sculptures, in which the artist uses instead a technique similar to latch-hook rug, refer to landscapes. We may perceive watery movements, snowy landscapes or coral reefs.

A project that grows complexify itself in a modular way, like the structures that inspired it
Like shapes, reflecting growth and metamorphosis, “Modular Structures: Flow and Constructions”, first proposed as final project at the end of her mastery, has evolved from its appearance at Diagonal and at the Vieux Presbytère in St-Bruno. Several new works have been added, including a new installation, made for the windows of Centre MATERIA. Overall, Elisabeth Picard creates works that merge fine crafts, contemporary art, design and architecture. Her meticulous and complex constructions are developed in conjunction with the mathematical laws governing the universe.

From November 2nd to December 16th, 2012, discover the originality of this artist’s work, presented for the first time in Quebec City. The opening of this exhibition will be held on Friday, November 2nd at 5 PM, under the honorary presidency of Mr. René Bouchard, General Director of the Centre de conservation du Québec. MATERIA, at 395, Charest Est Boulevard, is an artist-run center dedicated to all crafts. Its mission is to promote research and creation in the field of current fine crafts, nationally and internationally.